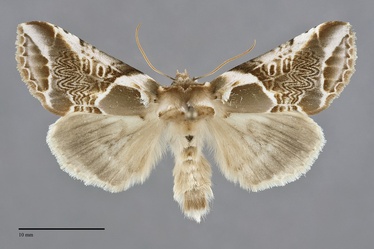 Habrosyne scripta is a distinctive, medium-sized moth (FW length 17–19 mm) that flies in forests throughout our area during late spring and summer. Its forewing has harlequin-like pattern of white on gray and warm brown with a pattern of curves and squiggles. The outer margin of the forewing has a scalloped white line at the base of the fringe, and the anal angle is expanded as a small flange.  White areas form two arcs on the forewing, a broad anteriorly convex arc along the basal and antemedial lines across the costal margin and an outwardly concave arc at the subterminal line near the outer margin. A third white area extends along the costal margin on the mid-wing and is continuous with the white outline of the orbicular and reniform spots. The postmedial line consists of five very wavy parallel lines. The fringe is warm brown with a strongly scalloped white line at the base. The orbicular and reniform spots are oval, outlined in white, and are filled with the ground color. The central reniform spot also contains a vertical white line. The hindwing is pale yellow gray with darker gray suffusion toward the outer margin and is marked with gray veins and a gray median line. The hindwing fringe is a pale shade of the ground color. The thorax is similarly colored to the forewing, with a whitish collar striped with brown and white and brown posterior tufts. The male antenna is filiform.

Habrosyne scripta can be identified by the warm gray-brown forewing with unusual pattern of white arcs and squiggly compound lines. It is unlikely to be confused with any other species in the Pacific Northwest. The range of the similar eastern North American species Habrosyne gloriosa (Guenée) is given as "Washington," in Powell and Opler (2009), likely meaning Washington, DC. This species does not occur west of the Rocky Mountains except in the Southwest.

Larva is smooth, mottled reddish brown. It is illustrated by Miller and Hammond (2003).

H. scripta is widespread in forests of the Pacific Northwest, including all of western Oregon and Washington, southern and central British Columbia, and in Idaho north of the Snake River Plain. The northern limit appears to be in the Peace River region of British Columbia. Habrosyne scripta has not been found in eastern Oregon and is only known from the Blue Mountains in southeastern Washington.

This species is widely distributed in boreal forests across northern North America as far south as Kentucky in the east.

This species is a foodplant specialist feeding on various Rubus species in the Rosaceae, particularly salmonberry (Rubus spectabilis) in coastal rainforests.

This species has a long flight season from late spring until early fall. It comes readily to light.