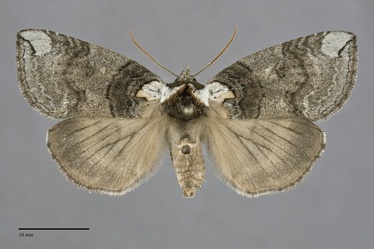 Euthyatira semicircularis is a gray, broad-winged, large moth (FW length 20–23 mm) that flies in forests during late spring and early summer. It has a pattern of parallel arched antemedial lines and a gray patch at the apex bordered by a short black line. The forewing is broad, has a slightly concave trailing margin, a smoothly convex outer margin, and a pointed apex. It is steely dark gray with a slight sheen, darker in the antemedial and postmedial areas. A smooth lighter blue-gray patch at the apex is bordered distally by a jagged black segment of the subterminal line. The color of the basal area is variable, either dark gray like the rest of the wing or light gray and ochre. The transverse lines are dark gray and black with multiple components of variable strength. The basal and antemedial lines form a characteristic series of concentric arcs, filling the darker antmedial area. The postmedial line is nearly perpendicular to the margins at each end with the mid-section curved laterally around the reniform spot. The portion of the subterminal line below the apical black segment is light gray. The terminal line is dark gray and is scalloped. The fringe is gray with thin dark scalloping at the ends of the veins. The hindwing is dark brownish gray, sometimes with a slight yellow tint, with dark veins on the basal two-thirds and a slightly darker gray marginal band. The hindwing fringe is tri-toned with an ochre base, dark gray median segment, and a pale whitish edge. The thorax is uniform dark gray in specimens with dark basal areas, or with contrasting light gray anterior tegulae in specimens with light basal areas. The male antenna is filiform.

The broad forewing shape, parallel concentric arcs at the base of the forewing, and oblique black mark at the apex are diagnostic of this species. E. semicircularis is unlikely to be confused with any other Pacific Northwest moth.

This species is common in coastal rainforests west of the Cascades.  It is also widely distributed east of the Cascades, even extending to the desert regions of southeastern Oregon, but appears to be tightly restricted to moist riparian habitats. It occurs in boreal forest in northern Washington, Idaho, and British Columbia.

Euthyatira semicircularis is widely distributed in forests across the Pacific Northwest, including western Oregon and Washington, southern British Columbia, and western extensions of the Rocky Mountains such as the Blue Mountains. It also occurs in the mountains of southeastern Idaho and the Basin and Range province of southeastern Oregon.

This moth is found in western North America. The range includes central Nevada and most of California to the south of our region.

Larval foodplants are completely unknown at the present time.

Adults of E. semicircularis are found during the summer, usually in June and July, although a few specimens have been collected in late May in the Pacific Northwest. They are nocturnal and come to light.