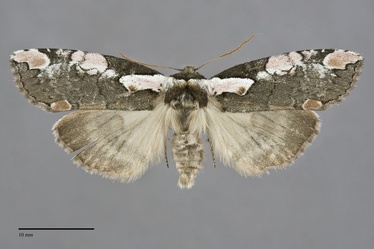 Euthyatira pudens is a spring-flying large moth (FW length 20–23 mm) with light pink patches on a gray background. The forewing is long and relatively narrow, with a pointed apex and slightly scalloped outer margin. It appears slightly curved because its costal margin is convex, and its trailing margin is slightly concave. The ground color is gray, usually with tan along the trailing margin, with a dusting of white in the cell and anterior subterminal area, and darker gray on the veins near the outer margin. Prominent, light pink patches bordered by darker gray are located in the basal area, anterior median area, and at the apex. The black transverse lines are faint except where they abut the pink areas. The fringe is gray, sometimes checkered with light pink. The orbicular and reniform spots are black filled with light pink, are small, and are closely positioned to the point where they are fused in some specimens. The hindwing is pale brownish gray with light gray thin discal spot, median band, and terminal area. The thorax has a dark brown-gray collar which contrast with light pink areas on the anterior tegulae. The male antenna is filiform.

E. pudens can be identified by its spring flight season and gray and pink color. It is most likely to be confused with Euthyatira lorata, which also flies in the spring, although these species have largely non-overlapping ranges in the Pacific Northwest. In E. pudens, the forewing spots usually touch each other, but are separate in E. lorata. E. pudens has more rosy pink color than E. lorata, is less vividly colored otherwise, and has a more mottled forewing pattern.

The only other Pacific Northwest species with extensive pink patches on a gray background is Eosphoropteryx thyatyroides. This species flies in mid-summer and has a silver stigma typical of the noctuid subfamily Plusiinae.

Larva is smooth, dark gray-black with a contrasting white ventral area. It is illustrated by Powell and Opler (2009).

This species is found in moist forests and riparian zones along creeks with dogwoods (Cornus spp.) at low to middle elevations.  It is usually rather uncommon.

E. pudens occurs in the Rocky Mountain region, including the Blue Mountains, southern and central British Columbia as far north as the Peace River region, and in the northern Cascade Mountains in Washington as far south as Wenatchee. It has also been found on Haida Gwaii (Queen Charlotte Islands), British Columbia. The ranges of this species and E. lorata approach each other in Chelan and Kittitas Counties, Washington and might overlap in this region.

E. pudens is widely distributed in North America, occurring across the continent to the East Coast.

This species is a foodplant specialist feeding on dogwoods (Cornus spp.) in the Cornaceae.

Adults are single brooded. They occur in spring and are attracted to lights.  The records from our region extend from late March until mid-June, with a peak in late April and early May.  This species is nocturnal and comes to lights.