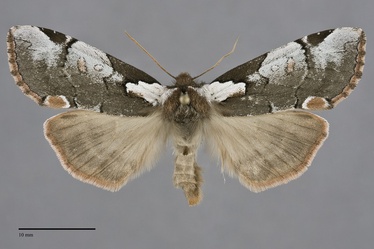 Euthyatira lorata is a large moth (FW length 22–23 mm) with prominent white patches in the basal area and along the anterior margin, and a tan and white patch at the anal angle of the forewing. This tan and white patch contrasts with the smooth, dark gray ground color. The ground color is smoky gray with a slight sheen. The forewings are fairly long and have a pointed apex. The anterior forewing darkens to charcoal gray between the basal and antemedial lines and distal to the postmedial line, the latter forming a nearly black elongate triangle near the apex. The transverse line are black and they thicken where they border the lighter-colored areas, especially surrounding the basal patch. The thin, black, orbicular and reniform spots are clearly separate from each other and are filled with the surrounding white color or pink. The fringe is warm orange-tan, usually weakly checkered with gray. The hindwing is warm brownish gray with a barely visible discal spot and darker gray median and terminal bands. The hindwing fringe is warm orange-tan. The head, collar, and posterior thorax are very dark brown-gray and contrast with white areas on the anterior tegulae. The male antenna is filiform.

E. lorata can be identified by its early spring flight season, its western Washington and Oregon distribution, and its smooth gray and white forewing pattern. It is most similar to E. pudens, which also flies in the spring, but has a more northerly range in our area. The ranges of these species might overlap in north-western Washington, but are otherwise disjunct. The reniform and orbicular spots of E. lorata are separate, whereas those of E. pudens touch and are fused in most specimens. The markings of E. lorata are more vivid, the light areas on the forewing are white rather than light pink, the forewing appears glossier, and the hindwing is warmer brown than those of E. pudens.

Eosphoropteryx thyatyroides, a noctuid with light pink areas on a gray ground, occurs in summer and has a silver stigma typical of the subfamily Plusiinae.

E. lorata is found in western Oregon and Washington as far north as Puget Sound and the vicinity of Wenatchee in Chelan County.  It has been collected most often west of the Cascades in Oregon, but with similar frequency along both slopes of the Cascades in Washington.

This species occurs on the west Coast of North America.

This species is a foodplant specialist feeding on various dogwoods (Cornus spp.) in the Cornaceae.

E. lorata is single brooded and the adults fly in the spring from early March until mid-June. Most records from our region are from April. It is nocturnal and is attracted to lights.