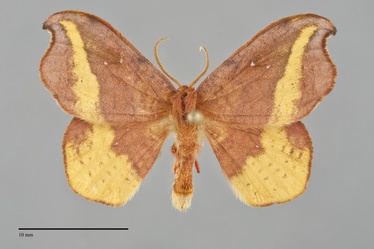 Oreta rosea is a small to medium-sized moth (FW length 14–17 mm) that flies in central British Columbia during the summer. Its forewings, yellow and rosy-red in color, have a hooked tip and the outer margin below this hooked tip is prominently convex. The color is variable, a combination of orange brown, rose-brown, and bright yellow. Most specimens are either entirely reddish or red-brown with yellow in the subterminal area of the forewing and distal to the median line of the hindwing, but nearly entirely yellow specimens with red limited to the distal wing margins exist. The color is faintly barred with brown or gray. The other forewing markings are usually faint. When present, the postmedial line is dark gray followed by yellow and is nearly straight except for an acute angle toward the apex. Some specimens have two dark spots near the anal angle. The ends of the discal spot are marked by two pale dots. The fringes of both wings match the adjacent terminal areas. The head and thorax match the base of the forewing. The male antenna is simple, but relatively thick.

Oreta rosea is distinctive in color and shape and is unlikely to be confused with any other species in our area.

This species is widely distributed in moist temperate hardwood forests of eastern North America. It likely occurs in boreal forests in British Columbia, although the precise habitat is unknown to us.

Oreta rosea occurs in the central and northeastern parts of British Columbia. The most southerly record encountered during this survey is from Clearwater.

This moth is found across boreal Canada to eastern North America. The range extends north to northern Alberta, northern Manitoba, and Newfoundland. Oreta rosea occurs widely east of the Great Plains as far south as Florida and east Texas.

This species appears to be a foodplant generalist feeding on various hardwoods such as birches (Betula spp.) in the Betulaceae and viburnums (Viburnum spp.) in the Caprifoliaceae.

This moth flies during the summer and has been collected during July and in early September in our region.  It is nocturnal and comes to lights.